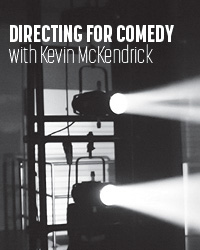 Directing a comedic play is, in many respects, identical to directing a drama. However, there are specific techniques that can be learned, which apply directly to comedy, and not to drama. These include developing physical business, understanding the construction of jokes, and exploiting the environment in which the play is set.

Join Kevin McKendrick, director of Theatre NorthWest production of Shoplifters (February 16-March 8, 2023) for a workshop on directing a comedy. The workshop will be broken down into three components: situation comedy; character comedy, and textual comedy with directing techniques for each explored. Naturally, a funny disposition as a director will be an asset, but there are many serious people who have directed very funny plays. You don’t have to be a clown or comic to recognise a good comedy.

This is a festival seating performance - the seats are on a first come, first serve basis when you arrive at the theatre.

Doors open 1/2 hour prior to start of performance.